Skip to content
That five weeks has been very interesting to me. I’ve flown four different return trips (two were company paid), to five cities in four countries, using five different airlines. At some point I felt like George Clooney in Up in the Air movie. Two of my journeys were recorded in my blog, but I don’t feel like writing the other two, hence let me just do some recaps and point several interesting things here.

Airlines
The first airline I took was ValuAir. Compared to few years back, they had rearranged the seats so that the cabin could contain more seats. Unfortunately that also meant lesser space for my legs. On the bright side, the seats were new and clean. The next flight was Air Asia, but there was nothing special about it. As usual we were served by prettier flight attendants and was subject to flight delay due to unavailability of the airplane.

Air France was the first non budget airline I took after several years. Generally they had a good service and delicious meals, especially on their long flight (my flight was from Singapore to Paris). The shorter flight (Paris to Napoli) used smaller planes with only snacks provided but same hospitality.

On my Beijing trip, the company provided me Air China, which was surprisingly unsatisfying. With larger cabin size compared to budget airlines, they provided only two restrooms for economy class. As you can imagine, I had to queue for few minutes before I could answer my nature call. And as you can read in my other post, there was an incident during my flight back to Singapore, where the engine stopped just before we taxied to the runway. 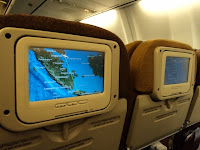 For my last trip to Indonesia, I tried to use the Indonesia’s national airline Garuda Indonesia. Whilst the online booking process was harder compared to other airlines, I was truly impressed by the revamped on board services they had given. Costing only +/- SGD 250 for round trip to Jakarta, the plane was equipped with brand new seats and in flight entertainments (though the flight was only 1.5 hours long). Free local newspapers were also provided before we boarded the plane. Unfortunately the last flight back to Singapore was plagued by almost two hour of delay.

Effect on Weight
Just few weeks before my first travel, I bought a digital weight scale with the interest of tracking and trying to reduce my weight. With help of Excel, I managed to plot a chart of my daily weight. Though until now the weight reduction program has not been fruitful yet (partly blame to the travels), but when combined with my travels the chart has become more interesting. A copy of the chart is shown here, with real values blurred for privacy reasons 🙂 however, I can tell you that the distance between the lowest and highest point is 3 kg.

The straight lines determines the oversea travels, since I don’t have access to my scale. On my first trip to Indonesia, it did not affect much on the weight. What was contrary to my initial assumption was my Napoli trip turned out reduced my weight significantly, though I ate a lot of pasta and pizzas there, and sometimes double dinner in the plane due to time zone shift. The Beijing trip gave more body fat to me, since there were more beers and fatty and oily foods (you know, Chinese food..). I also gained weight on my last trip to Indonesia, especially due to the fact that this was my final trip during this year summer break.

One conclusion I can take from the statistic is, your body may well use your calories reserve during long flights and jetlags. Therefore when you want to reduce weight, try to spend more time on planes 🙂

English Grammar
Finally, if you think that the English grammar in my blo 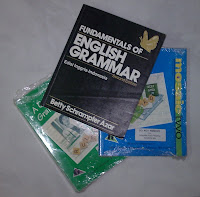 g posts is awful, well, you’re not alone. My friend Paulus who noticed the same thought that I should revisit basic theory of English by reading some English grammar books for high school students. Kindly enough, he gave these books during my latest visit to Jakarta. Therefore you can expect my grammar improves on the next posts (will be a challenge for me..) Thanks Paul!

If you think that nothing is wrong with my grammar, well, you’re not alone too. I think that my grammar is still at acceptable level 🙂