Be Amazed in Beijing!

It was Sunday afternoon at home, when I watched the Singapore Open 2010 final. Indonesia’s Sony Dwi Kuncoro played against Thailand’s Boonsak. It was a tough match for both, but in the end Sony won the game and took the championship. As an Indonesian I am proud of him winning the game.

But never thought of meeting him in person. 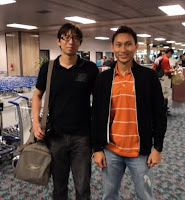 xt day, I went to the airport to take a flight to Beijing. The company I work for has a program for selected newcomers of less than 3 years. The 130 of us were invited into a team-building-like program in Beijing, namely “Be Amazed in Beijing!”. I met my Indonesian colleague Hermanto at the airport, who was also attending the same program. We then went to the immigration gate, but just when we were about to go through it, I saw the most unexpected person: Sony Dwi Kuncoro himself! Building up courage, we approached him to congratulate and ask for some pictures. First impression was he is a shy yet very nice person. Well, I was already amazed even in Singapore!

Afterwards, we had a light breakfast and boarded the plane with another friend Hafidh and Olga. We took off at 9.30 AM sharp. The flight was a bit boring, especially because we didn’t sit at the same row. Around 3.30 PM, we landed in Beijing, and took a taxi to the hotel. Apparently taxi drivers in Beijing do not speak English well, and we had difficulty to talk with the driver at first. Lucky I brought a city map with a pointer to the hotel location, so we managed to tell him the destination.

Around 7 PM, we came down to the hotel open space to have dinner in standing party style. It was also a chance to know each other. It was interesting to meet different people from different departments from around the world; but even more interesting when I tried the meals provided. There was one food that tasted like cockles, and I ate them without reading the label. Only afterward I read the label, and found out that they were in fact snails! However it tasted good; and when I told this to a French guy, he said “Oh, we have that in France: escargot!”.

The following days were mostly occupied with workshops and interactions with top management; but there were other interesting things as well. On one day, we had to play a game on exploring the city of Beijing, Amazing Race style. Our team were given the initial clue, then left in the middle of Hutongs area. There were some challenges, one of which was to find the “Silver Bridge”. Fortunately we had several Beijing colleagues with us, hence finding the bridge is particularly easy. The next task was to have one of us writing Chinese calligraphy on the street. Our Caucasian friend tried it, and surprisingly we had a full score!

After we finished the challenges there, we moved to another spot, the Forbidden City. We went there by public bus, again with the help of our local Beijing colleague. We entered the north gate, where one of us was asked to play a Chinese yo-yo. One of our French friend again surprisingly played it well, and our team got another perfect score. Then we were asked to go through the Forbidden City, all the way to the South gate. Though it was quite a distance (almost 1km), we didn’t feel tired as we were amazed by the architecture of the buildings inside.

We then took the s 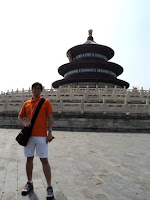 ubway to go to the next stop, Temple of Heaven. At this spot, we were asked to wear Chinese traditional costumes and perform some attractions, in front of passing by tourists. Even when we started to wear the costume, tourists had already taking pictures of us. More tourists came when we were performing the macarena dance. In the end, it was a shameful yet interesting experience. After exploring the Temple of Heaven, we moved to the last spot: the Beijing National Stadium a.k.a. Bird’s Nest.

At the Bird’s Nest, unfortunately there was not enough time to play the game, so we were just taking few pictures at the outskirt of the stadium. Then we went back to the hotel.

Silk Market and Return to Singapore

Fast forward to the last day. There were no more programs to follow, and my flight would be at 3.30 PM. In the morning I and Hafidh decided to go to Silk Market, which is about 10 km from the hotel. Unfortunately we didn’t really understand the distance at that time, and we just stupidly tried to go there by walking. Only after we have passed the Chaoyang park, we realized that we could not make it on time to the market. Hence we took a taxi and arrived at the market around 10, meaning we only have an hour to shop before we have to go back to hotel for check out.

Silk Market is a traditional market, where we need to bargain with the seller to get the best price. I remember my boss told me the day before, that I should start bargain at tenth of the asked price. It was hard to swallow at first the fact that they would really raise the price up to 10 times. But in fact they did! When I asked the price for a t-shirt, the seller offered the price of RMB 185 (SGD 37) each! We tried to bargain and even threat to leave without buying, and finally he (and us) gave up with RMB 90 for 3 t-shirts. We then went to a supermarket to buy some packed foods to bring back to Singapore. There we also met an Indonesian couple who were in Beijing for holiday. After some chat, we proceeded to the cashier to pay the foods.

It was 11 already, meaning it’s time to go back to hotel to checkout at 12 noon. This time we used the subway to get to the nearest station from the hotel, followed by a taxi ride for the rest of the journey. Getting a taxi part was not so easy, since it was too close to the hotel already and most drivers were reluctant to take us for such a short distance. Fortunately we found one who were willing to take us, and we managed to check out on time.

About 1.30 PM, we arrived at the airport, but alas, the flight was delayed by an hour and half. 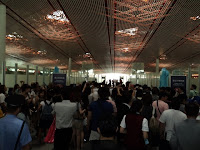 On the other side it was blessing in disguise, since I could have more time for lunch and sightseeing inside the airport. When Hafidh and I were about to pass through the immigration check, there was a sudden commotion building up. Many girls suddenly screamed with camera in their hand, all rushing into a guy who turned out to be a Chinese celebrity. This guy was heading through the immigration as well, hence making us more difficult to pass through, considering the crowds there. Oh, and he’s not that handsome anyway.

When we finally boarded the plane at 4.30, all passengers were seated, then something scary happened. Before the plane started taxiing, the engine suddenly stopped and the electricity went off, including the air conditioner. And it happened twice. I have seen this problem many times with cars, but this was the first time I saw it happened to a plane. Few minutes before take off.

We finally took off at 6 PM, and luckily nothing bad happened during the take off and our flight to Singapore. And that was the end of this adventure.

More pictures from Beijing at this link.