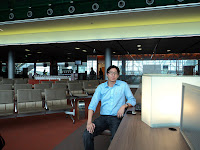 Prelude
Working in a multinational company means you occasionally have to (or, have a chance to) go overseas for business trip. And this time my chance is go to Napoli (Italy) for a two-day workshop. As my schedule was too tight, I decided to not extend my stay there for holiday. Instead, to make use the free time around the meeting to visit interesting places. It is interesting because you have very limited time to visit places and you have to trade off between the “interest-level” and distance required to go there (i.e. time).

Enough the blah blah, so there I was in Changi airport, few hours to midnight. It was very crowded in the AirFrance check-in counter, though it was still 2 hours before take off. Passengers were required to use the self check in kiosks and there were only one airline representative to help ignorant people like me to use the machine, creating long queue of people. After the check in, I only had few minutes for snack before boarding the plane.

This was the first time I took long flight (12+ hours), and I got a very important lesson, that you should try to request seat in the aisle, especially if it is an overnight flight. The reason is, you will need to go for restroom or just a short walk every now and then. If you sit in the window side, you need to wake two passengers beside you everytime you want to get out.

We approached Paris-Charles de Gaulle airport in the morning when the sun has just risen, and from the window I could see the scenery is very beautiful. The land was filled with lots of farms, making it look like a seamless green area. Unfortunately I could not find the infamous Eiffel tower. After landed, I had about 3 hours to take the connecting flight to Napoli. The flight to Napoli was worse, mainly due to two monsters seating behind me. Well, there were two kids, screaming and kicking my seat and the person next to me. Thank God it’s not 12 hours!

After 3 hours, we landed at Napoli, and I took a cab to the hotel. The driver could not speak English, but he is very friendly and tried his best to promote interesting places in Napoli. At some point, we passed San Paolo stadium, and he kept yelling “Maradona! Maradona!” while his finger pointing to the stadium. I asked him “Maradona? Argentina!”, and he replied “No, Maradona: Argentina. This: Maradona!”. Turned out later he was trying to explain that this stadium is being proposed to be renamed after the football star Diego Maradona, who played in Napoli before.

Anyway, only after 5 minutes on the road, I have noticed Napoli has the craziest driving style I have ever seen. The driver can easily turn his head back to talk with the passenger when the car is running at 100km/h. In highway they overtake rudely without giving signs. And in the city it is packed with cars and honk easily here and there (more or less similar as in Jakarta). No wonder many F1 drivers come from Italy.

Upon reaching the hotel, I immediately took a bath and get out again to look for two most important items: GSM prepaid card, and a pizza for lunch. Quoting one travel book: the best place to eat pizza is at the town that founded it. So there I was, exactly at the town where pizza was born! I found one pizzeria and ordered one pizza and a sparkling water. Sparkling water is new for me as an Asian; it is similar to soda water, but the gas is naturally available right from the source. Back to pizza, the bread is very thin and sticky, and the top contains more tomato and cheese than we usually found in Asia. The taste: perfetto!

I walked around the hotel afterwards, and found many interesting buildings and statues (you can find them at the pictures link). Napoli is a coastal town, but also has many hills on the other side. Closest to the hotel is Castel dell’Ovo (which unfortunately I did not go inside due to limited time), and from there too you can see the mount Vesuvius. I couldn’t find a GSM card, but I then found a supermarket! I always prefer supermarket to buy food to bring back and share with my friends. Not only they are cheaper than the one in tourist spots, but also in supermarket, you get what the local people eat, not the ones specialized for tourists.

At the night, we had dinner with the some of the workshop participants, next to Castel dell’Ovo. We found out that I had taken the same plane from Paris earlier with two of them. When they asked “where did you sit, Pascal?”, I couldn’t remember the seat number, so I tried to answer with a place of interest, “did you notice the noisy kids at the middle of the plane? I sat in front of them!”. Turned out they sat only 1-2 rows from me.

For the next day, we had the meeting full day. But in the night, again we had dinner together. This time we went into a hidden pizzeria inside an alley at the downtown, thanks to our friend who stays in Napoli. Upon reaching there, we had to be in waiting list, since the place was full. We more or less waited for about 45 minutes! However, the waiting was paid, since the food was very delicious, even better than the 1st pizzeria I came to. What we had for dinner were mostly different variations of pizza. We also had some croquettes for snack (if you are Indonesian, it similar to our “kroket“, but this croquette is filled with mozzarella cheese). During some chat the next day, my friend told me that we had to wait only 45 minutes because our Napolian friend is a regular customer there. Without him, we might need to wait twice as long!

And for the day after (2nd day of workshop), only 3 of us had dinner together, since the rest have already flew back to their hometown. We went to a nearby pizzeria, but ordered spaghetti this time; and closed with a gelato ice cream. On our way back, we noticed an orchestra doing their concert in an open space, and it was nice.

On the last day I spent about an hour and half for morning walk around to take pictures for the last time, since my flight back will be at early afternoon. During the walk I passed some big dogs with the height of my waist, some are untied. At one time, there was this dog I passed by, and we were less than 1 meter apart. Then she suddenly bark at me. For a second I was stunned, but luckily she stopped barking when I just try to walk away and ignore her. Around 10 AM I checked out and went to the airport.

The flight back to Paris was smooth, but this time I had to wait 8 hours in Charles de Gaulle before the next connecting flight to Singapore. And the bad thing is, I could not leave the airport to have a short visit to the city. Fortunately the terminal for international flight is comfortable enough for transit, with internet cafes and free PS3 terminals to play. In fact, most part of this story was written there while I wait for the connecting flight.

The internet cafe costs €5 per hour, and the only way to get a user id is through the automatic vending machine. In this case, I made one fatal mistake by inserting €50 notes into the machine to get one hour access. Turned out (and I should have known earlier) that it returned the €45 change with coins! In the end, I got additional 23 coins to take with me through the plane, to Singapore, and I don’t know when I am going to use up these coins later.

Around almost midnight, I boarded the plane and flew back to Singapore! I sat next to a Bulgarian guy who comes to Singapore for another 7 month trip with a ship from Singapore. He is a ver
y nice guy, but I would say also bold. He speaks only little English, having difficulties to fill in the immigration card, but dare to travel half of the world. Sign to have more travel? 😛

You can find the pictures at http://picasaweb.google.com/pascalalfadian/NaplesTrip