Who would expect that 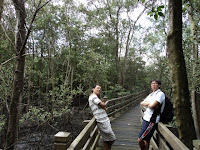 there is still a wetland in the modern city of Singapore? Well the truth is, there is one: Sungei Buloh Wetland Reserve (SBWR). Located at north west of Singapore, this place is well preserved by the government, despite scarcity of land in Singapore.

We (me, Richson and Evan) agreed to meet at Kranji MRT Station around 8 in the morning, to take a bus to SBWR. On my journey to the MRT, the sky was very dark and once in a while light rain poured. I was afraid that rain would start falling heavily hence canceling our trip, especially because our trip to SBWR has postponed twice before. When we met at the MRT, there was only light rain, but there came another problem: it took very long time before bus 925 that could take us there came. And when it came, the bus was so full we couldn’t enter it.

We then decided to take a cab there. The place was surprisingly quite remote, with few buildings around. Luckily when we got there the rain stopped, and the weather was just nice for a walk. The ticket is $1 / person, which entitles you to walk around the wetland as well as hourly short movie screening. As our time was limited, we skipped the screening and started walking.

Compared to Bukit Timah or MacRitchie Reservoir, there were less trees and more water in SBWR. There were also some viewing platform where you can stand there to see Johor Bahru of Malaysia across the sea. Other interesting place is a lookout tower where we can see the jungle in the surrounding. It was very peaceful and a calming experience, especially after a week in the concrete jungle.

Unfortunately, as Richson pointed out, there were not so many people coming to SBWR. They are more comfortable to go to shopping malls or watching movie. However, we were there not for the people. We were in fact looking for crocodiles, as promised by my friend Handy. During his visit there, he could spot crocodiles, some crossing the pathway we use to walk. However after few hours exploring the wetland, we couldn’t find one. Even at the area marked with “Watch out for crocodiles” sign. Anyway it was not so bad after all, since we found also many other interesting small animals (that I don’t know the names of them) around the area.

After two hours walking, we came back to the entrance. Just when we about to leave the place, we found lizards swimming at a small pond near the entrance. Well, at least we found an animal that is similar to crocodiles.

Going back to the city was another problem. It was around 11 AM, and I had appointment to play badminton at 12 PM. I thought it would be just in time if I take a cab. Unfortunately, there were no cabs wandering around the area, and when we called the cab hotline, we were replied with “The cabs around the area you are going to take taxi from are fully booked”. I am somehow sure they are not fully booked, the drivers must’ve been just too lazy to travel to this remote area. Finally we walked about 500m to the nearest bus stop and take a public bus from there to the Choa Chu Kang MRT station (if only it was Sunday, I did not need to walk that far, since the bus would stop at a nearer stop). Only from Choa Chu Kang MRT, I could get a cab to the badminton court.

Take bus 925 or 925# (Sunday only) from Kranji MRT to go to SBWR. More pictures can be found at http://picasaweb.google.com/pascalalfadian/SungeiBulohJuly2010.