This may be my last (very short) post before the dormant period. The break is over, and the new semester is coming next week. During my semester term I will not have the luxury of having the time to write posts.

At the weekend just before the semester starts, I had the honor to be invited to the Maureen and Ardian’s wedding ceremony. Maureen was my friend in Sunday school, long time back in Jakarta. She is also a world class freelance graphic designer. Meanwhile Ardian is a world class computer scientist, and has became my friend since we met at the 2005 Google Code Jam competition.

It was very interes 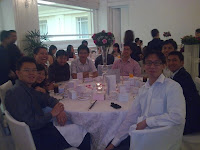 ting to realize that Singapore is indeed such a small place. At the wedding reception, I met various friends: colleague from office, my parents’ friends from church, high school friends, and the most interestingly: TOKI alumni. TOKI stands for Tim Olimpiade Komputer Indonesia, i.e. the Indonesian Informatics Olympiad Team who were the selected students to represent Indonesia in the International Olympiads in Informatics. Ardian has kindly reserved one table for us to sit altogether, about 10 of us. And as you may guess, having geeks all sitting in the same table makes it interesting in a certain way.

Some of us ordered soft drinks. Interestingly, they poured the soft drink into a plain glass, and after we drank part of it, sometimes the waiter came to take the glass and replace it with a new one, fully filled with the same soft drink. Started from the idea that the soft drink in the used glass will be wasted, we wanted to know what is the minimum amount of the soft drink consumed, before the waiter would come and replace the glass. The first idea came into our mind was, of course, binary search. The strategy is as follow: first we would try to leave the glass half full, and see whether the waiter would take it or not. Had he taken it, it means the limit may be equal or greater than the half of the glass, and we would try leaving three quarter full at the next attempt. Had the waiter not take it, the limit must be lower than half, hence we should try a quarter at next attempt. Repeat the process until we could precisely determine the exact minimum percentage of soft drink left for a waiter to take it.

In the end, the conclusion was too simple: the waiter would take it at half full.

3 responses to “Lunch with Indonesia’s Greatest Minds and Goodbye”