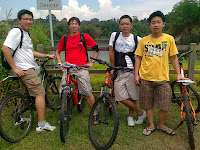 Happy Deepavali for all my Indian friends! Often called as festival of light, Deepavali is celebrated every year in Singapore as a public holiday. It fell on Friday this year, and it supposed to be a very good time for me to go home to Indonesia. Unfortunately, I had a group meeting for school project the day after, so I could not afford to do it.

Instead, we planned an outing to Pulau Ubin! Pulau Ubin is an island North East of Singapore where often said as the last “kampong” (village) in Singapore. Its nature is relatively untouched by urbanization compared to the main island. This island is best visited for cycling, and that was exactly what we did during this Deepavali holiday.

I, Evan, Joseph, Nicolas and Richson met around 9.30 in the morning at a cafe near Simei MRT station. After having a quick breakfast we boarded a bus to Changi Point Ferry terminal, which located about 10km from the station.

Upon arrival at the ferry terminal, there were already many people queuing to take the boat there. Fortunately the queue quickly reduced, thanks to the short interval between one boat departure and another. Pulau Ubin is only 15 minutes boat trip from the ferry terminal, and we arrived there at 11 AM sharp.

We then rented several bicycles, one for each person for $12. A slightly better bicycle cost $15. There is also another bicycle rental that is specialized for off-road track that costs up to $20. After pumped the tires, we were ready to go!

Our first destination was all the way north to the Noordin Campsite, which is also located next to a police training camp. There was not much to see here other except the small beach, one of the few beach which you can see the sea without tankers in Singapore.

The next stop was to the east side of the island; the Chek Jawa. I will tell you more later about this it. Meanwhile, we tried to take a shortcut through the northern area of the island to go there. After cycling for few minutes, we were leaving the forest area and started to enter open space. At about half to noon, the heat from the sun was killing us. So I took out my sunblock and we started to cover our skin with it to prevent sunburn. We guys love skincare, too. Nicolas had even better idea to paperfold the newspaper I have bought earlier into a hat, to keep our head cool.

We then continued our journey, but only for a few minutes before another cyclists came by us and told that the road leads to a dead end. I didn’t really buy it, but we decided not to risk it and turned back to take the longer road.

Around quarter to noon, we arrived at the Ceck Jawa. I’m not sure if there is something to do with the Java island or the coffee, but this place is a small wetland in southeast of Pulau Ubin. To attract people, the government also built several facilities such as the boardwalk, viewing tower and a visitor center. Unfortunately bicycles are not allowed to enter. A sign told us to leave and lock our bicycles outside, but we couldn’t find any lock rental or anything. We finally just left it there and hoping nobody would take our humble bicycles.

After few meters walking at the boardwalk, we arrived at the viewing tower. The tower is about 7 stories high and the view from above was very amazing! We could see the both sea and the forest from there. Not for the weak heart though, as the platform is shaky as people walk around.

hen walked again to the viewing platform that shows us the view of a strait, and the island behind it. We argued for a while to decide whether the island we saw was Malaysia or Singapore. Thanks to my good ol’ compass, we knew it’s Singapore. It’s a traditional compass, and yes, I know there is an app for that in iPhone.

The last stop at Chek Jawa is the visitor house. From the distance it looked like a cottage, but when you go inside, you would see nothing but some displays about Chek Jawa. However, it was a very good place to take pictures, especially when not so many people around. There was also a viewing jetty but we didn’t go there as it was going to rain and lightnings started to scatter.

We then decided to end our journey and get back to the ferry terminal. We had to cycle our way back to the terminal, and it had started to rain already. Fortunately we brought disposable raincoats to keep us dry. At about 3 PM we finally back at the main island. We had a quick Sundanese lunch at a nearby hawker center, then went back to our each own home. I was tired and sleepy, but very happy about for the outing we had!

Find pictures of our trip to Pulau Ubin (including the beautiful panoramic view from the viewing tower) at http://picasaweb.google.com/pascalalfadian/PulauUbinCycleTrip