It was only a few days before my trip to Jakarta, when I heard the news that Uncle Peter passed away. For me, he was one interesting uncle, for his love of travel and the culture of Indonesia. When I asked him to help propose my then girlfriend in Bandung, he had this idea of bringing our big family to stay in Pangalengan, few kilometres outside Bandung. Other than known for its cool air,  Pangalengan also host the house and tomb of Boscha, one renowned Dutch scientist whose name is used as the name of Bandung’s observatory. From him also, I watched my first angklung performance at Saung Angklung Udjo.

Unfortunately, even after rescheduling my train to the earliest trip at 5 AM, I still could not make it to his funeral. That left me, my son Desmond, his mom Yunnie and his grandma with another plan.

Our first trip with our driver Pak Didi upon reaching Jakarta was to Aunt Gwan’s house, sister of my late (biological) mom. We “had to” visit her to take a family photo that we ordered earlier (the photo served a good excuse to come and visit, where these days physical visit can be easily replaced with chat apps). Her late husband was an architect, and he gave a lot of wooden touch to this house, making it more like a villa rather than a house. Combined with Aunt Gwan’s warm hospitality and her age, this visit really slowed down my pace of life. Servings of Siomay Mami (est 1988) gave reminiscene of old times, where she used to cook these for us when I visited her house, 20 years back. Desmond was also very happy to play around the house with Aunt Gwan and his loyal helper Ambu. Time ran fast and suddenly we had had spent 2 hours there, and had to move again to our next destination.

Next stop was Aunt King house. Desmond fell asleep on the road, and continued sleeping upon reaching Aunt King’s house. However, thanks to Jakarta heat he woke up a few minutes later; which was a good news. Other than he wouldn’t have extra energy to play with us past bedtime, he also could play around in Aunt King’s house. As usual, he climbed up and down the stairs, and explored the house. We didn’t have much time to spent there, and moved again to my brother Daniel’s house to pick up my dad, who had just came back from cemetery.

Just before reaching Daniel’s house, we had simple lunch at nearby market. Local dishes ketoprak and soto served to satisfy our hunger. At Daniel’s house, Desmond once again climbed up and down, playing with Daniel’s basket ball, guitar, electronic candles, an empty jar, TV remote control, you name it. Since Pak Didi had to pick up my (step) mom from his office, we didn’t spend too much time here and headed home to Bintaro.

We spent the rest of the day just by staying at home. That night, I had the best sleep for few weeks. Not because my home is less convenient compared to mom’s house, but because my brain managed to switch to vacation mode, and I did not have to worry about work when I woke up the next day.

The next day was Sunday, so we started our day by going to the church nearby. My mom and dad, who were faithful Catholics, witnessed that we didn’t really pray and concentrate to God in church; well at least if Desmond is around us. He climbed up and down the chairs, walked here and there, and asked to use the elevator (which actually was meant for senior citizens and pregnant women, not healthy children) many times. Good thing that we managed to take him for blessing during communion.

After church, we visited the historical Ragusa Ice Cream shop. Yunnie had learned about this place from some travel blog, and wished to bring Desmond to try the ice cream there. Unfortunately, Desmond fell asleep again en route, kept sleeping when we were there, and afterwards. I had had their ice cream before several time, but already forgot the taste. My order of mint ice cream was wonderful, recommended if you like to try something different. For those who likes normal tastes, I would recommend Tutti Frutti.

For lunch, we visited Mlinjo Resto, a Pekalongan restaurant in Tomang. All sorts of Pekalongan dishes from the regular megono, sriping and soto to the unusual pecak cucut and cumi hitam. Again, unless you have an adventurous taste buds or came from Pekalongan, not all dishes are for you. Note that my mom, dad, Yunnie and her mom were from Pekalongan.

After lunch, we headed back to Daniel’s house. Not having anything much to do that Sunday, he was considering to go out with us if possible. Uncle Chris and his friend were there when we arrived; a good chance to meet another relatives during this trip. Daniel’s wife Bianca was there, too; making it practically a full house. Desmond climbed to the second floor once again, and took some cookies from that empty jar he played yesterday (it’s filled now). He also once again interested with the basketball, and Daniel gave him a present of a new, cleaner, rugby ball instead (thanks, Daniel!). About one and a half hour there, we left Daniel’s house, to go to our next stop, Aeon Mall BSD City. We had been longing to go there for some time, since we understood that it was big shopping mall. Daniel and Bianca decided to not come along, since it was already too late.

I did not really like the shopping mall, even upon entering the parking lot. There were too many cars queueing to enter the mall, and the number of people inside, especially at the supermarket, were even worse. We were about to buy some bottled water, when we witnessed ridiculous number of people waiting in line to buy either sushis or puddings, despite the relatively expensive price. After a few minutes wondering around what to do next (shopping malls are more or less the same), we then decided to go upstairs to find playing area for Desmond. There was a place named Playtime, where for IDR 100K, children can spend 2 hours inside the playground of more than 10 types of activities. Needless to say, Desmond was very happy inside. We then had a simple dinner at the (overcrowded) food court and headed back home. Even so, the outward traffic was so congested, filled with people leaving the shopping mall. Having Desmond being so excited, I jokingly asked my mom in law to bet that he would not fell asleep until we got home. I thought I would win when he jumped here and there inside the car, only to find that he did fall asleep just a few minutes before reaching home.

We left for Bandung the next day. As it coincided with the Labor Day (a.k.a. May Day), where demonstrations are usually held in city center, we departed early from home. Fortunately we arrived on time at Gambir station, and everything was smooth for check in and trip back to Bandung. Just before the train started running, we heard demonstrators already yelling out their oration, but we were already safe inside the train.

To finish off, these photos show many of Desmond excitement even when returning to Bandung. He likes to play inside our dogs’ cage, but when he was wearing a tiger costume, it’s just too cute to not take the picture. 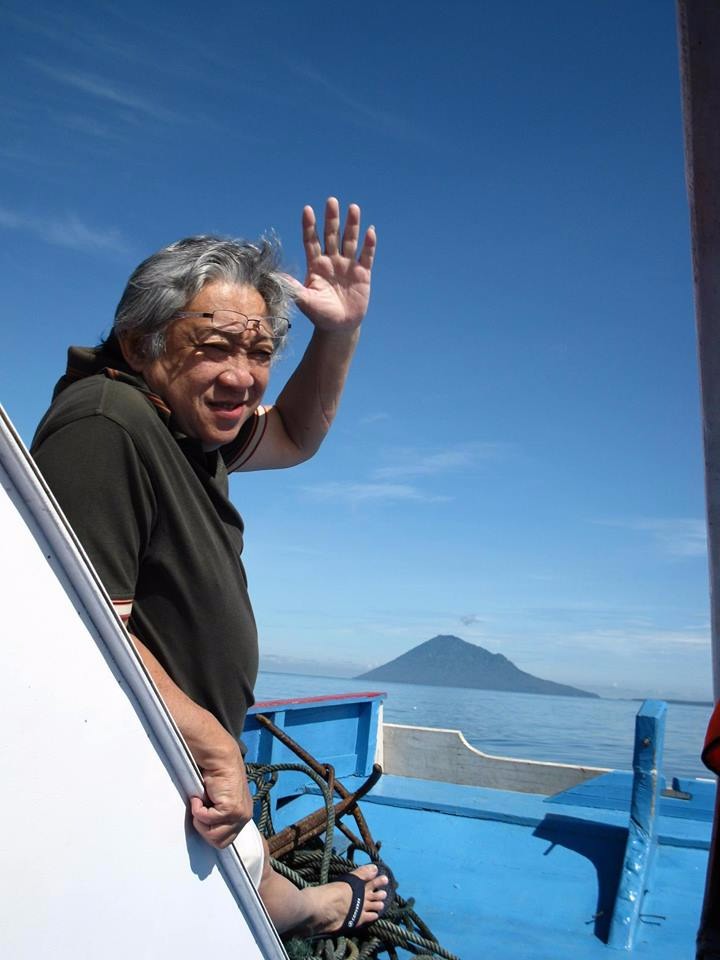