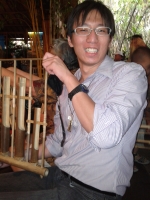 Translated to “Mr. Udjo’s angklung haven”, this place hosts daily cultural performances and sell traditional souvenirs. Though I visited the place twice during my undergrad study, I only went to the shop to get my overseas friends a gift. More than 5 years after I knew about the place, my uncle brought me here to see the performances. And it was spectacular, just as he had advertised earlier.

The show is held once daily in the afternoon at 3.30 PM, but it’s better to call in advance to confirm and book the place, as the seats are usually fully occupied. It is ironic yet interesting that half of the capacity is occupied by people from other countries. At that time, there were people from Netherlands, France, and even Sudan. There were also people from other provinces like eastern Java and Medan.

Anyway, about the show. It started with a wayang performance which I admit was quite boring, though the skill of the puppet master is exceptional.

Afterwards, we were surprised by children running around the stage. There could be around 100 children over there. Some of them were playing musical instruments, some just yelling, and others were playing traditional games. But they were all looked happy for sure. Whatever they did seemed like a game for them (note their facebook page has a cover photo that describes exactly what I meant). There was this chubby girl named Diva, who shout the loudest and instantly became sensation throughout the performance. All in all, it was meant to show an illustration of circumcision ceremony for a boy. Yes, we do have a ceremony for circumcision.

The next performance was a traditional mask dance. Again, though not so exciting, this performance showed a carefully trained skill that the performer has. It was then followed by a performance called Arumba, a marriage of traditional angklungs and modern musical instruments, creating a nice music experience. It was played by several teenagers, some of which are the descendants of late Mr. Udjo, the founder of this haven.

Then came out Mr. another Udjo, also the descendant of the late Mr. Udjo. But this guy was so special, he was one of the leaders and grandmasters in this haven. He showcased some of the haven’s achievements, one of which breaking the world record by having thousands of people playing angklung at the same time. In this performance, he also lead his team to perform some pop songs, like Michael Jackson’s “We Are The World” and the more difficult one Queen’s “Bohemian Rhapsody”.

There were also an interactive performance, where the guests were lent different type of angklungs, identified by Indonesia’s island names. There were total of 8 types, denoting musical notes from do (c), re (d), mi (e), … for one octave. Each type is also represented with a gesture, played by a young boy, who is the son of the aforementioned grandmaster. Then, looking by the boy’s gesture, guests are invited to shake their angklung, and together creating a musical performance.

The event was closed when the children were wandering around the guests seat, and asking them to come down and dance with them. Traditional games like ular naga and others were played together. All in all, it was a very nice experience, to learn something about the cultural richness of the place I live.

Saung Angklung Udjo is located at Jalan Padasuka. There are many ways to get there once you’re in Bandung, however be responsible to the nature, take public transport (http://kiri.travel?finish=saung+angklung)