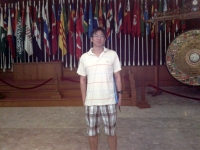 This trip was unexpected. It was when I serviced my car at Auto 2000 Asia Afrika, the customer service told me that I had to wait few minutes for the car to get a free wash. There were two cars in front of mine in the line, and after 15 minutes they didn’t move. So I decided to walk around Jalan Asia Afrika to see if there is interesting place to visit. My Nokia phone told me that Museum Konperensi is not too far away. Museum Konperensi is a museum inside a building named Gedung Merdeka. However, once inside, it’s difficult to distinguish which one is Konperensi, and which one is Merdeka part.

Walking towards the museum, there were interesting places around the street. One is Bandung KM 0, which denotes the “exact coordinate” of Bandung city. This point is useful for standardizing distance between Bandung and another cities, especially in intercity roads. The other is a local newspaper “Pikiran Rakyat” office, which features some boards showing today’s newspaper for free. In case you don’t have Rp 2,900 for a copy, you may just go there to read one.

I reached the museum few minutes before 1 PM. Unfortunately it was closed for lunch from 12 noon to 1 PM. However, after waiting for few minutes, it finally reopened. The entrance is free, but visitors have to fill in the guest book. Without looking at my entry, the receptionist asked me where I came from, thinking that I am a tourist. I innocently answered “Jalan (street) Mohammad Toha”. “Ah, Bandung!”, she confirmed.

There were pictures of Indonesia’s founding fathers like Soekarno and Mohammad Hatta, and some dioramas from the independence era. There were also other exhibits from the konferensi theme. One of which was a classic telephone that, of you pick it up will play a translated version of a phone call by a Eastern European lady with Soekarno. The conversation sounded suggestive at first, but turned political then boring along the time.

Another place to see is the conference hall, most likely the room where the Konferensi Asia Afrika meeting was held. At the stage there were flags of the members. There were also a big gong of world peace showing flags of different countries, though I am not sure what it means in this Asia-Afrika context.

After about half an hour visiting the museum, it was time for me to go back to the service center. It was an interesting experience, since I don’t have too many chances to visit this type of places.