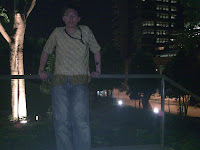 There are two ways to go back home from my office. One is to take bus N°198. It usually takes about 30 minutes to go home, including the time required to cross the street, waiting the bus, and walk a bit. The other is to walk all the way. It by average takes 30 minutes as well if I take shortcuts (that includes crossing the KTM railway). Normally would walk home only if I can go back early.

But this day was different. I needed to finish something at the office until 7.30 PM, and I’ve skipped several exercise sessions for past few days. So I decided to walk home to replace my sessions. I grab a dinner first at Fusionopolis, then stayed a bit there to let my tummy calm down first. Afterward, I started walking home with about the same route – in the dark.

Was walking in the dark, I was a bit “lost” in a sense that I didn’t take the shortest route I usually take. But it led me to a new park I’ve never seen before (at night – in fact I’ve seen it during the day, but I didn’t know it’s a national park). I arrived at One North Park. Not sure which part is the Biopolis, and which is One North Park, but somewhere there is an amusement object where you can clap your hands between two big dishes and hear your clap echoing. Other than that, there’s not much you can see there. Especially at night, where the pathway is not lit by garden lamps.

For girls, it is not recommended to walk alone. Boys, just be careful of homosexuals.

The park itself is not very big, so I passed it after only 5 minutes. Then it comes to the KTM shortcut. But this time I wouldn’t dare to cross it. It’s even darker than One North Park, and there is no pathway, only railway and grass. You wouldn’t know what you will step into. Moreover, there’s a small abandoned house nearby, a perfect supplement for Singapore Ghost Story (I should upload the photo someday..)

One North Park is located next to Biopolis area, near Buona Vista MRT.