Due to its huge size, it may be difficult to find out how to go there. At least that what happened to me and delayed me from visiting this beautiful park. The official website provides me only the bus numbers without departing and alighting points, as well as recommended starting point to walk. However, I finally decided to go there anyway. Oh, by the way, it’s easiest to go there from the entrance near Gleneagles Hospital (take bus 105 towards the east from Commonwealth MRT, about 5 bus stops away).

So I went there with my friend Handy around lunch time. We didn’t have lunch before, since we were planning to take it in “Taman Serasi Food Center”, whereas according to local map is just next to Botanic Gardens’ main gate. Unfortunately when we reached there, we couldn’t find one. All we saw around were private houses. So we had to walked a bit to nearby Tanglin Mall and had our lunch there.

After lunch, we came back to the gate to start the journey. Looking at the map, it’s half impossible to explore all spots in the garden. Therefore, we just walked along the west side of the park, towards the north, passing three big lakes as our checkpoints.

The first one is the Swan Lake, where… well, swans, live there. Seeing this lake and the swans made me remember the Tchaikovsky’s (did I spell it right?) “Swan Lake” symphony. It surprised me how the swans move very smoothly on the water. And apparently it surprised my friend, too. Initially we saw them from distance and he thought they were robots (you know, it’s Singapore…). But after examining them closely, I realized that they in fact don’t swim rushy like us human being. They just “row” with their feet once in a while and let their streamlined body flows swiftly. 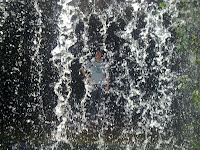 Next stop was the Ginger Garden. I don’t know what it has to do with ginger, but there was a beautiful-man-made-mini-waterfall. So, why not take some pictures? You can see myself behind a waterfall. Thanks to Handy he could take my picture when I was inside the cave (Now he’s a bit handy on this occasion). Nearby was the Orchid garden, but to enter I need to pay some fee. Not interested.

We walked again and got into the second lake: Symphony Lake. Part of the lake is meant to be used as a performance stage, but most likely for calm, classic ones. Water is separating the stage and the audience area, so I can’t imagine this stage to be used by pop/rock bands (where the performers usually jumps to the crowd, it’s too far here).

Next interesting spot is the Evolution garden. Well, not really that interesting. It’s a man made one, explaining how how living creatures evolved. Maybe for kids, yes.

Walking again, I felt “back to Singapore” again. In the distance I saw cranes and tall buildings, and at the left of the pathway I took is the construction of the new Circle Line MRT Station. There was a sign attached, promising the benefits of new new station to be ready on 2010, blah blah blah.

Then there were the Eco Lake inside Eco Garden, translated to Malay “Taman Eko”; in which if translated back from Bahasa (Indonesian) to English becomes “Eko’s Garden” whereas “Eko” is a common name for Indonesians. Not so much thing to see, only some turtles I can took picture of.

We were tired already, so we had to find a way out. From inside we could see the Bukit Timah Road. But alas, it was closed with fences and a small sign told us we do can’t get to the road through here. So we had to turn around and quit through Jacob Ballas Children’s Garden, in which we were not very interested to see because, uh, it’s for children. The exit gate led us to NUS Bukit Timah campus, and consequently Bukit Timah Road. From here you can take bus N° 186 to go to the nearest MRT, Queenstown. And that conclude our journey.

But a bit of tip: don’t go to northern side, it’s not really worth it.

Singapore Botanic Gardens has two entrances, but the easiest is to locate the Gleneagles Hospital at N° 4 Napier Road, Singapore 258498.