The Other Side of Sentosa 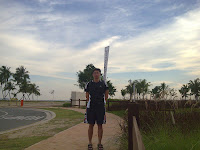 Since I’ve become Sentosa Islander, I regularly visited that beautiful island in weekly basis. But this time was different.

I left home around 4 PM, planning to do some evening run in the beach. Arrived at Harbourfront Bus Interchange few minutes later, I immediately chose and took the bus with “Sentosa” sign on it. There was a small text “To Sentosa Cove, for residents only” but since the bus was full of ordinary people and the guy let me in, I got in without second thinking.

I realized I really took the wrong bus when the bus turned left in a junction where it usually turned right. I passed a golf course, and a several very big satellite dishes, just as in NASA movies. Then I arrived at the terminal: an elite residential area.

I wanted to go back to Palawan beach, but taking the bus route was too far, the bus only went back to Harbourfront, and there were no other bus stops heading to Palawan in between. Then I decided to try walking the other route: the east side. In my pocket map, it were all sands, meaning undeveloped area. But the local wall map said there is a road leading to Tanjong beach.

I needed to take the Cove Dr (it’s a street name). To make sure, I asked a security guard of a residential complex, whether I can take this Cove Dr road to Tanjong beach. He was a bit hesitated, then asked permission to ask his boss. He called his boss, then reply me with “Yes, my boss say for walk can lah, but not for car and it’s veeery far. You can take the other way to go there” (he pointed the normal way).

“No problem, I’d like to try. But it goes to Tanjong beach?”, I replied.

“Yes can of course, but veeery far!”

“It’s okay”. And I walked despite his hesitation. Along the way I watched many halfway done resort, and private landed houses. Sometime I saw people riding bicycle in this quiet area. After 20 minutes walking (it’s not very far anyway, at least only one “e”), I can already see Tanjong beach. But alas, the access to there was fenced; may be this what he meant about “cars can’t pass”. Then I started to look for small pathway. Indeed, there is one way aside, through small jungle. Nearby was small amenities for construction workers (toilets, etc). But again, it was closed. Probably if there were people, they would let me pass. But since nobody there and the closure was difficult to open without breaking the structure, I decided to go back and take the normal way.

Well, then I go back again to the bus terminal, taking the normal way back. Before exiting, I took some pictures. Included were some construction site by Lippo group, and the big dishes I mentioned before. 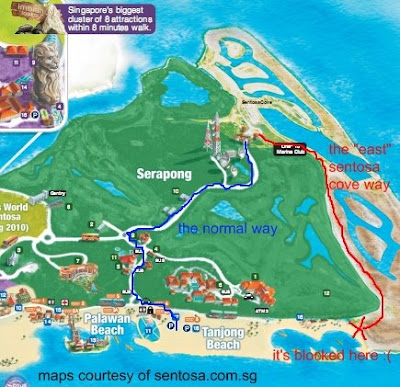