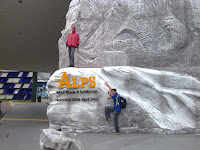 To maintain my IQ above the MNI (Minimum for Not Idiot) level, once in a while I need to visit geek-er place than the usual ones. Then, here I was in the Singapore Science Centre.
I called most of my friends to accompany me going there, but only three were dare enough to come: Rika, Nico, and Andres. So we started at around 2PM, buying the combo ticket of the Science Centre itself and the IMAX theatre of around $13 something. For the IMAX movie, we chose “The Alps” which plays at 3PM, so we have one hour to visit the Science Centre (SC) first, watch the movie, and go back to wander around in SC.
Most of the first one hour we spent at the optical illusion section, in which we could see many, err, optical illusions. Some illusions are nice, but the others makes my head a bit dizzy (focusing too much at certain exhibit). Then we spent few minutes in electrical and nanotech section
Then we headed to the theater. Unlike regular theater in which you see 16:9 rectangle as the screen, in IMAX you see the inside of a sphere as the screen. That to say the screen is half portion of sphere. With this arrangement, you can feel yourself “inside” the movie, because as you see other directions you see the environment as well. The movie was about the Eiger mountain which part of the Alps, somewhere in Europe. My friend recommended this movie rather than the other one, and for me it was good enough. It is sponsored by Holcim (not important leh).
After watching, Rika had a quick lunch and we continued again to the SC. Then we visited sections about energy, global warming, sounds, lego, etc. In fact there was more to see but around 5PM, there was an announcement saying the SC will be closed at 6. So we rushed to more important sections and took some glances only. We were still there to look around until few minutes after six, in which some uncle came to kick us out (politely of course). Finish.

Even you think the story is not so important, I hope you get the morale: [1] come there earlier (it opens at 10AM), and [2] take the IMAX movie that plays after 6PM (there is one at 7PM).