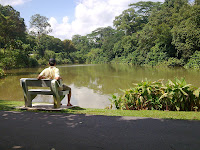 Prologue
This Christmas, should be a healthy holiday. I didn’t have any plans nor appointment in the morning, so I tried to use the NUS facilities that I just got by holding a student card. Therefore I prepared from home bringing one additional shirt and swimming equipments.
When I reached there, I entered gym and start excercising for half an hour. Then after, I tried to use the swimming pool. It’s good. After finished, I thought, why not continue trekking for a complete “triathlon”? I was thinking of HSBC Treetop in MacRitchie Reservoir. But before, I need to get some info in the library.
In the midway, I found a “Kent Ridge Park map” sign. I took a look, and found an interesting thing in a map: There’s a spot inside the park named “The Pascal”, hmm.. interesting.. Then, off we go to Kent Ridge Park!

Kent Ridge Park Trail
There are two ways to go to Kent Ridge Park. One is through the walking path by the Science Park Dr. The other one is running path, by the South Buona Vista Rd. I took the running path, even though I didn’t run. Differences? In Science Park you see buildings, whereas through South Buona Vista you can see trees on your surroundings*.
After 15 mins walk, I reached the Kent Ridge Park entrance, with a, um, I don’t know. Is it a missile launcher, or a tank? Nevermind. So I start walking, following a path that leads me to “The Pascal”
After few minutes walking, I found a small lake. In the map there are two lakes inside this park, and the lake I found should be the small one, although it is still quite big for me. So I stopped and took some pictures of the peaceful lake. I was tempted to take my own picture, but there was nobody there. So I tricked it by setting my camera on timer and put it on a dust bin. A bit hard and dirty though, but result is okay (see pic above).
Then I continued my journey. Unfortunately there were not pretty much signs or maps ahead, so I just followed the directions recorded in my mind. Eventually I’ve got out of the park and reached the Science Park. Hmm, where is that “Pascal” condo. Nope, it was just me. I just thought with the good name as “Pascal”, it should be a condo or good housing.
But I can’t see nothing but office buildings. I looked around for few minutes there was no sign of Pascal. Then I thought of going home instead. I waited at a nearby bus stop, near the Mendel block. There was a guy there sitting. I thought he was waiting for the bus as well, but even before I asked him, he already said “The bus stop to MRT is across the street; I’m just sitting here”. Then I walked across the street to the bus stop. In the bus stop I read the route, and there was another bus stop named “Aft Pasteur”. Hmm.., suspicious.. I recall again there is “The Pasteur” building near The Pascal. Then I changed my mind. It was so close! So I searched again. But it was not easier thouugh, I even has to come back to the same guy sitting at the bus stop and ask where is the place.
But after few efforts, I finally found “The Pascal” building. It was not a beautiful building though, nor a condo. But it was good enough as an achievement. It was an office building. Turned out the buildings here are named from famous scientists name. Pascal was in one block with Pasteur, Mendell, and Maxwell. I wanted to take picture in front of the building, but there were some people working there and I felt bad to disturb them. But anyway, I’ve met my goal. Yay!