It will take sometime until I can post a nice article, if any. The quality of mobile internet connection is Indonesia is not as good as in Singapore, and I am practically a nomad for a few moment now. I really want to tell some interesting stories about my adaptation to the new life, but let’s see. For the moment, I have a story about my trip to Malacca, just days before I left Singapore for good. Here it is.

My landlord gave me a very nice suggestion to spend sometime around Singapore before I left it for good. Therefore, Malacca it was. Malacca is a 4-hour journey from Singapore, depending on the traffic and immigration. As it is a small town and I didn’t have too much time to spend, I only spent a night there along with my friend Handy.

We departed from a bus terminal in Bugis, about 8 AM in the morning; thanks to my Malaccan colleague Jia Hwang who bought the ticket for me. The bus was quite nice, and we were lucky to sit in the back. About 1 hour before we reached our destination, the bus’ air conditioner system seemed had overheated, spilling fresh water every now and then in the middle seat area. On the bright side, it made people laugh of the silliness. 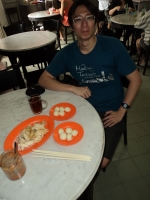 We reached the “Malaka Sentral” terminal about noon, but we had to take a cab to the main tourist area, about 15 minutes journey for MYR 20. We alighted near the end of Jonker Street and quickly queued up for the chicken rice ball restaurant there. It seemed quite famous among tourists, but after all it was just a chicken rice with the rice rolled into few balls.

We continued by walking along the Jonker Street (a.k.a. Jalan Hang Jebat, Chinatown), which was very interesting. Walking along that street felt like going back in time. All buildings were decorated in a Chinese 50’s era style. Being a tourist attraction street, it was quite amazing to see some unpopular buildings like a newspaper office or a mortuary over there.

We then checked in at our hotel, Baba House, located not far from the Jonker Street. Exactly as described in a Lonely Planet book, the lobby decoration was very interesting and classic, but the rooms were quite bland. However, it’s not bad at all for a MYR 145 per night rate.

Outside the Jonker Street, the town was influenced by Portuguese culture. There were classic buildings like churches and fort remains. The well-known Stadyhus is the central of the surrounding buildings: Christ Church, Windmill, etc… We climbed up the hill a bit to see the St. Paul Church. Plenty of tombstones were planted there, remembering the names of several Portuguese lived in the past. Just nearby, there were some Malay Sultanate museums and the Cheng Ho museum.

The sun was almost set when we went back to Jonker Street. Interestingly, that street was closed for vehicles and transformed into a night market, similar to those in Lau Pa Sat. We rested a while in our hotel, and out again, this time to the infamous satay celup restaurant, Capitol Satay, about 15 minutes walking from the Jonker Street. We were a bit late, so we had to queue for more than an hour for a seat. On the same street with the Capitol, there were 2 more satay celup restaurant with almost no visitors. They were selling alternative value propositions, like “Why pay 90 cents in Capitol, while our satay is 60 cents only” or “We have 40 years experience!”.

The queue was paid off when we started to dine there. The menu was simple: you pick several uncooked meats or vegetables in wooden sticks, then you cook it yourself in a bowl of peanut sauce. However, it was somehow very interesting and quite delicious, too. While we were eating, we heard all staffs were talking in Javanese. It turned out that the owner of the stall was from Java and had become a Malaysian resident.

After dinner, we headed to the Maritime Museum, not far from Jonker Street. Unfortunately it only opens during the day, so we only spent the time outside, taking pictures of the massive ship that acts as the museum.

On the next day, we spent morning time by walking to the Fort Santiago, which is well known for photo taking spot. It is the remains of a fort that was built also by the Portuguese. The place was nice but not exceptional, perhaps because we had seen St. Paul Church the day before.

Before going back to the hotel I stopped by a shop selling cendol. The interesting thing about this chendol is the cup. It was made of thick paper, and equipped with the handle; also made with paper. The patented paper handle was made strong enough to hold a full cup of the drink.

For lunch, my friend Handy had the infamous peranakan laksa, while I chose the safer side by ordering a normal noodle (I had bad experiences with spicy food).

It was then time to go home. We had to go back to Malaka Sentral to take the bus back to Singapore. We would like to try the public bus there, but it was too crowded hence too risky for my weak knee. We then decided to just take another cab anyway. Few minutes before 2 PM, we were already in the bus heading for Singapore; ending our short journey to Malaka.

One response to “Malacca Trip”