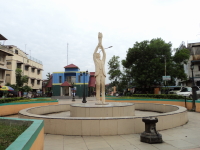 This Christmas holiday, I spent one night in Batam for transit to Jakarta. Reason? Just for adventure. There is actually not much tourist attraction in Batam, as told by my friend. One spot that may stand out would be Nongsapura, an upscale resorts area Northeast of Batam. Staying there will cost me at least S$200 per night, so I decided to stay at a cheaper area instead, but take a peek of Nongsapura by getting a ferry to the Nongsapura terminal instead of the usual Batam Center terminal.

There is no ferry going to Nongsapura that departs from the usual departure point Harbourfront. Instead, I had to go to Tanah Merah Ferry Terminal, which I stupidly mistaken with the Changi Point Ferry Terminal. Assuming that I would go to the latter, I took a train to Pasir Ris station, and planned to continue my journey using a bus. Luckily, when I was there I had difficulties finding the correct bus stop, hence I took a cab instead. The driver knew that ferries to Batam only departs from Tanah Merah, not Changi Point Ferry Terminal. If I really took a bus, it would be too late for me.

The trip to Batam’s Nongsapura takes about an hour, including boarding and leaving the ship. Nongsa terminal is located inside a small gulf, and upon reaching it, I saw two different views on each side. On my left side, there were upscale resorts, just what I was looking forward to see here. However, on my right side was a poor rural area, where people bathing in sea water, not for fun but because it’s much cheaper for them to do so. The terminal itself is pretty well decorated in with a tropical island theme. However, there were only one immigration officer to serve us, so it took sometime to clear the queue. On this trip, I stayed on a budget hotel, namely the SkyView hotel. It is located quite far from the terminal, so the only reasonable way to get there is by cab. The terminal itself is pretty remote, and the nearby resorts usually have their own shuttle bus to pick up tourists. Therefore I was left with the only option to take a cab for a whopping price of IDR 100.000.

I reached the hotel about 5.30 PM, and as it was Christmas Eve, I started to walk around to look for a church to attend the Christmas Eve mass. The hotel receptionist recommended me a Batak-themed church, about 500 metres from the hotel. So I walked there and asked the schedule to the lady that stay there. However, she recommended me to go to another church instead, for the mass will be held using a traditional language that I will not understand. She recommended a church in Nagoya called “Immanuel”, which is not within walking distance from the hotel. Hence I took a taxi there, with another expensive price of IDR 30.000.

Close to the church was a shopping mall “Nagoya Hill”, so I went there after the mass was ended. I took a pizza for dinner, and paid a visit to a bookstore. One magazine about tourism in Batam attracted me, as one article featured in the front page was about “budget hotels in Batam”. There was no price tag, so I just took it and proceeded to the cashier to pay. To my biggest surprise, the magazine costed IDR 50.000. I would have no problem to pay for a good magazine, but the value did not seem to worth for that magazine (for comparison, FHM Singapore costs SGD 6 or IDR 42.000). Hence I cancelled my purchase for the magazine. My trip back to hotel was also surprising: another IDR 50.000 for a cab ride back. Fixed price.

The next day, I spent the morning jogging around the hotel area. It was not so nice as there were thrashes and some of them were burned causing me to inhale the smoke. After taking a shower, I went for the second time to Nagoya, but since I was not in a hurry, this time I asked the receptionist for a public transport to go there. She recommended an angkot (minibus) with her estimate price of IDR 6.000. I believe she just gave me a worst case number, since I really looked like a tourist. Turned out the driver only charged me IDR 3.000 for a one way trip. Different with angkots in Bandung, these angkots in Batam has a sliding door at the passenger deck that should be closed during the trip. When I was about to help a lady to close the door when she boarded the minibus, she said “no need, it will close automatically”, and reaffirmed by the driver. And she was right, when the minibus started to descend, gravity helped the door to close automatically. Clever!

Just as told by my friend, there was not much to see in Batam, and that includes Nagoya. Probably one that could be interesting is the Pasar (market) Nagoya area. At one street, there were many people selling various kind of kripik (crackers) and asinan (fruits drenched in vinegar). Another street has series of Singapore style hawker centres, while some of them serves only Chinese vegetarian food. I had my brunch on one of the non-vegetarian hawker center, and turned out they also sell tea and coffee in Singapore term: teh for tea with milk or teh-o for tea without milk. There was also a building named “Batam Lucky Plaza” which sells mostly mobile phones and jewelleries. As I walked around, many people calling me “friend” to offer a cab or an ojek (motorcycle-cab). After about an hour, I returned back to my hotel to pack my things, as I would fly to Jakarta at 13.40 PM.

Ferries from Singapore operates daily with a ticket price of around SGD 30, destined to Nongsapura and Batam Center (among other terminals, too), but the latter is recommended. Staying in SkyView hotel costs a mere IDR 160.000 per night for a standard room, but a superior room for IDR 180.000 seems to be a better bargain, with bigger room and 21″ TV (standard one is 14″). I would recommend to take public transport whenever possible, as cabs are very very expensive (however in the evening, it’s probably better to pay more rather to risk your safety). From the SkyView, it takes about 15 minutes to the city center Nagoya. There were also hotels at Nagoya, but they are generally more expensive.