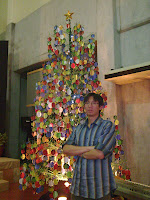 The immigration officer laughed at me for a while, then she got busy again serving another passengers. Yes, I was there in the Singapore immigration, at the automated clearance gate to be exact. My friend just told me recently that as a Singapore permanent resident, I have the priviledge to pass the immigration gate through the automated clearance using my travel document and thumbprint. Yet what I should have learnt is that travel document means passport, not an ID card. I stupidly put my ID card into the small gap in the machine which supposed to be inserted with the first page only of my passport. And so I cried for help to get the card out the only officer there, but she was too busy checking other passengers passport and had no time for silly mistake like what I just did. Luckily after some tries I managed to let it out myself. Phew!

Then I had some subs for dinner and grab a cup of coffee while waiting for the boarding call inside the transit area. Did I tell you that I was going to take a flight back to Jakarta for vacation? It has been a long time since I had a night flight like this. The passengers seem to be tired, including me (that’s why I bought some coffee). In the plane, I sat in a 3-seat row, taking the one closest to the window. The middle seat was empty, and at the aisle side, an ang moh (western people) in his 30s looked extrememly restless and exhausted. Sometimes he put his head on the front seat, trying to be able to sleep. At another other time he murmured himself. Poor him. I was more or less exhausted as he did, with exams and deadlines in the past days. But I decided to smile, since it was all over, and my holiday was about to begin!

We jumped time to when I have landed in Jakarta. My brother was to pick me up at the airport, so I tried to call him. Yet after several desperate tries, I’ve given up. Everytime I call a number, I could only hear a prerecorded voice “Sorry, you cannot make a call at the moment. Please contact the customer service!” But the problem is, I couldn’t even call the customer service, with the same message! Luckily I found a small phone café*. So I made a phone call to my brother’s mobile. I was surprised with the bill. It was 8,500 IDR (1.5 SGD) for one minute connection! But I had no choice anyway (later I found out that I couldn’t call because I have activated the call barring feature – very clever).

The first few days in Jakarta was well spent with family and old friends. On the day before christmas, I and my brother spent the day watching local movie “Sang Pemimpi” (lit. The Dreamer). It tells a story of a young boy from remote village and his struggle to get scholarship in France. In the evening, we attended a christmas eve mass in a local church of where I usually attended the mass before I left to Singapore. But there’s something different now compared to previous years masses. After the mass has ended, I could still see people shaking hands and greet each other, but there were also some people stucked to their mobile phones. I saw a couple where the husband typed something (must be christmas greetings) into his Blackberry, while his wife struggling to type into her Blackberry at the right hand, and and iPhone on the left. Too bad. For myself, I spent the time asking my brother to take my picture with the christmas tree there.

At the christmas day, we came back to the same church to watch a play starred by local teenagers. It was about a poor mother who tries to teach her son for becoming a rich person in a wrong way. Spiced with some jokes along the story, it gave a very good message that one needs to work, not merely looking for shortcuts to obtain wealth.

The next day, I spent my time with my friends from high school. The last time we met was 5 years back on our trip to Bali. Unfortunately time only allowed me to meet them during the day, which was used to play futsal. We were playing against one of our friend’s younger brother and his friends. They were in their 20’s, and the age difference was more than enough to make us exhausted playing against them. Luckily I and my family spent the evening attending a wedding ceremony of a relative (which for me simply means free dinner), enough to recharge the energy.

On my last day in Jakarta, I spent morning time to buy some sport shirts. Followed by another futsal game, but this time with friends from church. It was 2PM, and the sun shone the the brightest. It really exhausted me again. In the evening, I and my brother attended a Sunday mass, followed by dinner of Sundanese food with family.

That sums my first part of my trip, where the early morning of next day, I traveled to Bandung; and the story is to be told in the 2nd part.

* locally known as “wartel”, the phone café serves similar purpose as internet café. But instead it rents, well, phone lines.