The clock showed 10.40 am, and I was sitting inside the examination room at NUS. I was doing the last exam of this semester, for the subject “Network Security and Management”. I saw several people had come out, it seemed easy. Myself, I’ve answered all questions, but was not having 100% assurance they would satisfy the professor. Ah the heck, if I stayed there 5 more minutes, I would be forced to wait until 11 sharp, as the rule says nobody can go out of the room in the last 15 minutes, even if he has finished the exam.

Then I made up my mind, I called the professor and asked his permission to go out, and start the getaway journey to Johor Bahru! Call me lousy, but I prefer Johor to other fancy destinations in Malaysia for its proximity to Singapore as well as cheap prices.

I spent about 30 minutes in Clementi before going to Johor to open a new bank account (yet it’s out of the scope of this story ;P). Therefore I started going about half past eleven. Because the day before was a public holiday, and the next day was Sunday, I was hoping it wouldn’t be crowded in the immigration. It was true that on the Singapore part, it was a breeze. In Kranji MRT station, the SBS bus even had to wait a few minutes to wait until the bus is full. Yet in the Johor side, the road to immigration was slightly jammed by private cars. The immigration clearance was smooth, though. 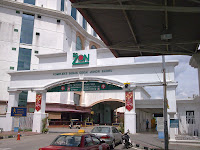 (Psst, here’s a dirty little secret: my birthday was coming up, and rather than spending more money to treat my friends in Singapore, I’d rather spend more on my time to take them to Johor for half-priced food. But that’s what I call sacrifice! Oh yes, so for that reason, I would like to survey the place I have found at the internet: The Zon, a duty-free shopping mall). Therefore, when I arrived there at 1.15PM, I started to look for a transport to the Zon, which (according to the map) is close to Ferry terminal to Batam/Bintan.

At first I tried to go there by bus, as I’ve researched the numbers of buses going towards Zon. Alas, I couldn’t find where those buses stop. With my belly already screaming for calories, I finally decided to take a cab anyway. There was a taxi counter, where for each trip the passenger is required to buy a certain printed ticket, mostly to prevent the driver from overcharging the passengers. The trip was a breeze 10 minutes, but just enough time for me to chat with the driver, a guy in his 50s. I couldn’t speak Chinese, and he couldn’t speak English. So we tried to speak with Malay/Bahasa and he started to blame me that I couldn’t speak Chinese although I’m a Indonesian-born Chinese. And as usual, I played it safe by blaming Mr. Soeharto.

About 13.30, I reached Zon, but sad to say that it was below my expectation. There are only few shops, mostly selling liquors or pubs that open at night. There was no food court and the McDonald’s stall only sells ice cream (but there was a Starbucks stall, though – weird!). Then I just went into a pub-style pizza restaurant, with most of the people inside were smoking. D’oh! Luckily I could find a seat that was far from them. I ordered a smoked salmon and an orange juice. After wandering around for an hour, I came into conclusion that the place is not worthy enough to spend time with my friends. Then I decided to go back to civilization: The City Square, another shopping mall near the immigration.

I started walking outside to find some mode of transportation. Don’t want to give up the experience of taking a bus, I tried to search for a bus stop outside the shopping mall. It was interesting to see around, where there are traditional markets, hawker-style food stalls and the beach. Across the strait you could see Singapore main island, specially the Senoko power plant. After a few more meters of walking, I heard a loud noise of drums being played. It turned out to be a traditional Chinese drum practice by high school students in a Chinese school named “Foon Yew”. And where there is school, there should be delicious-yet-high-in-additives food! So I stopped by a rujak stall to taste some. I also bought a drink named “special teh-c”, which basically is a mix of tea, condensed milk and cendols. And yes, it is good, better than the Singapore ones.

I spent a few minutes sitting in a bus stop before giving up as for almost half an hour, only one bus passed, and it didn’t seem to stop at a place I know. In the end, I decided to take a cab instead to go back to City Square mall. I spent few hours in the City Square, and another few in Kotaraya Plaza, hoping to be able to wait until 6 pm, since I wanted to try riding the Malaysian train back to Singapore. Based on the schedule, the train departs from Johor Baru at 7 pm, and tickets are sold only one hour before departure. The last time I tried to take the same train, it was delayed by one hour, forcing me to take the bus instead. I was hoping the train wouldn’t delayed again this time.

So I spent another few hours wandering around in City Square, since it is just across the station. I wanted to have dinner there, but since I was still full from the rujak and teh-c, I decided to buy a take away food instead. Only few minutes before six, I bought a grilled chicken rice pack, and rushed to the station to buy the ticket; hoping that I could eat my dinner at the station’s waiting room. Unfortunately, this time again, the tickets were sold out. Disappointed, I got out of the station and find a place to eat my dinner. I couldn’t bring it back to Singapore since there is a restriction on importing poultry products.

The trip back to Singapore was not so interesting, may be because I’ve lost interest on the trip due to the train delay. However, I am still grateful for the mini-backpacker experience, and some half-priced music CDs and food I bought from a local store!

To go to Johor Bahru, you can take train to Kranji MRT, followed by SBS bus 160 or 170 bus from there. If you go from the west side, there will be announcements to take bus from Woodlands instead, but I wouldn’t recommend it since there are less buses departing from Woodlands.

You can see few pictures at http://picasaweb.google.com/pascalalfadian/JohorTrip2009