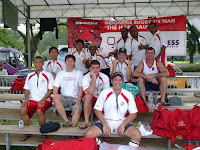 After a year has passed, the SCC Rugby 7s is held again (see last year). Similar to last year event, it was held in Padang, few minutes walk from City Hall MRT. But unlike the previous one, sadly this year even has not been as entertaining as before. Why? Please bear with me.

The price of this year event has increased to $25 from previously $20. A reason for this could be of that they have extended the event by one day into a 3-day event, with the first day being a tournament for schools and colleges. However, since it was held on Friday, it’s practically useless for me. The bad news? I couldn’t just pay $20 for the 2-day event. The other part of the monies might also have gone to rent a big screen projector to show the score and replays (oh, and there’s also a big tower to record the game from the top of it). One thumb up (only) for the technologies.

However, it still did not satisfy my hunger for a good atmosphere of the games, though. On this year event, the supporters could have only less interaction with the players. In last year arrangement, it was easy for us from the benches to get into the field. Therefore during the victory (or goodbye-losing) lap, we could go down and greet the players. In this year tournament, fences separating the benches and the grass field. If one wants to go past the fence, he has to turn around from the back stairs and walk quite a distance.

Okay, enough about the rantings and let’s go to the real business. Remember that last year, Indonesia Barbarians managed to win the Bowl cup. It was a very good and unexpected achievement for a newcomer. Unfortunately, the teams that they’ve beaten last year didn’t come again this year, so it’s far more difficult to compete this year.

On the first day games, bad luck has gone into them, since they didn’t manage to score even a single try (in football term: goal). In the second day games, they managed to score few trues, but the enemies were still too tough, and they have to suffer bitter defeats, failing to come home with a trophy this year. However, it is to be noted that they have fought their best, and no one is to blame.

All in all, with all the drawbacks, the event was still good to watch. Congratulations too, for the organizer to hold such a big event in this tiny country!

Photos and videos are available in http://picasaweb.google.com/pascalalfadian/SCCRugby7s2009 (do check out the war dances!)