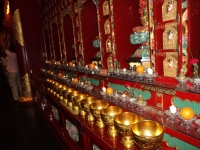 Buddhists celebration day Vesak is observed as public holiday in Singapore. This year Vesak Day fell on Tuesday, making the day-off a bit awkward. It was just a one day holiday, so I couldn’t go too far (like, going back home to Indonesia), but spending the day at home was just plain stupid. I was in the condition of what Indonesians call “style-death” (mati gaya): I really didn’t know what to do for several hours in the morning.

Well, the answer turned out to be actually simple: it’s a Buddhist day, so the best place to go is, the temple! There is a temple in Chinatown open for public, namely the Buddha Tooth Relic Temple & Museum (even from the name you know it’s way more than just a temple). This temple is 4 storeys high, plus a rooftop structure; and anyone regardless of religion can enter, as long as you wear decent clothes.

The first storey is where I started. Many devotees came to pray, therefore it was quite crowded inside the building. There were some rituals can be done inside the temple. Some devotees queued to get a chance to “bath the Buddha statue”, which merely to pour fresh water into a small statue (my landlord told me about this earlier in the morning, so it’s nice to get a first view look). There was another interesting ritual, which was to put 100 coins into 100 bowls, placed contiguously next to the walls. It seemed that each bowl represent one god, as there were many god-like statues behind the bowls. That interested me to give it a try, by exchanging $10 notes with a hundred 10 cents coins. However, somehow I ran out of coins before I could put into the last four bowls; I must have mistakenly put more than a coin in the bowl before. Judging from the number of coins inside the last few bowls, seems that other people made the same mistake, anyway. Pity those poor last gods..

Then I went to the 4th floor, which where the tooh relic was located. The place was more sacred, so we had to take off our shoes before entering the room, and we were not allowed to take photograph. Another devotees and some monks were praying in front of the tooth relic, separated by a huge glass wall. By now you should’ve suspect that there is something special about the relic. Well, aside from being sacred, it’s made from 320 kg of pure gold! (clink clink..). In this floor, people could also pour some water to the statue there. 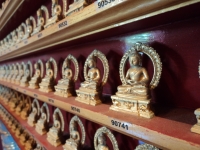 On the third floor there was a museum, showing yet another statues. And another devotees pouring water into the Buddha statue. But this time there was a printed description about the “Bathing the Buddha” ritual (finally, an explanation!). It originated from a story of 9 nagas spraying purified water into a newborn Buddha. Since then, devotees do this kind of ritual every 8th day of 4th lunar month anually.

There was not much to see in 2nd floor, so it concluded my visit to the temple. Although I’m not a Buddhist, it was quite an interesting experience, especially to understand how people from different religion pay homage to the Gods.

Buddha Tooth Rellic Temple and Museum is located at N° 288 South Bridge Road and accessible from either Chinatown or Tanjong Pagar MRT.

To be continued… The Red Dot Design Museum.