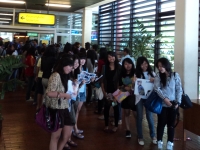 There are two ways to react to disturbances in your travel. One is to curse, of course. The other one is to enjoy it as a challenge, as the people in the Amazing Race game. This easter, I went for a short trip to Indonesia and had an opportunity to appreciate that fact. For this trip, I took a flight from Singapore to Jakarta, continued with a intercity (mini)bus to Bandung, spent one night there, another intercity bus to Jakarta, spent another night, and back to Singapore.

My first challenge started when I landed in Jakarta. It was to arrive in Bandung as fast as possible to, you know, meet my girlfriend. After touchdown at around 10.30 in the morning, I rushed to find the earliest bus that depart to Bandung. Unfortunately the first bus was already full and the next departure would be two hours later. I then decided to take a “premium” bus, in which each passenger will be delivered to their final destination, instead of the bus terminal. That day was a public holiday adjacent to normal weekend, therefore as predicted the traffic was awful. Even worse, I was unlucky to be the last person to be delivered, after wandering around Bandung and the suburbs. In total, I spent 5 hours on the road! I admit that I failed on my first challenge. Anyhow I was lucky that my girlfriend was understanding enough for my lateness.

The second challenge was when I was about to leave Bandung. My plan was to take another intercity bus bound for Jakarta at 3PM, expecting to arrive Jakarta 3 hours later, so I could catch the Easter eve mass at 7PM. I reserved a cab by phone for 2PM; 1 hour before is more than enough, I thought; which proven to be wrong. I started to worry when the cab company called 20 minutes before 2, saying that they haven’t found a free cab for me. At 2 sharp, they called again, informing the same news. Therefore, I went for plan B: take the infamous Bandung public transport angkot. I had to take the angkot to train station, and transfer to either another angkot or flag a cab there. Quite a pessimistic idea, but there was still hope. Another unfortunate event, after few kilometers the angkot did what is known as ngetem: the driver stopped and wait for another passenger to get in, with the hope of getting more money from more passengers. Based on my 4 years experience in Bandung as a student, this ngetem ceremony could take at least 15 minutes, while the time was already 2.20. I then alight and tried to flag a cab passing by, with no luck. Most drivers were reluctant as the bus terminal is located at a heavy traffic area. I spent about 10 minutes trying to flag a cab with no luck. Finally, it’s time for plan C…

While looking for a cab, I spotted a Damri bus stop, while the bus was there waiting for passengers. To be honest, though I’m a regular angkot user, I have never taken a Damri bus in Bandung before. What caught my attention was the sign on the bus front window, saying that the next stop is Pasteur, which is very close to the bus terminal I was heading to. The driver was not there yet, so I confirmed with a lady who sat at the front seat. She said it’s possible to alight at the terminal, but I had to tell the driver beforehand. After 15 minutes of waiting, the bus finally started to move. It was obvious that I will miss the 3PM intercity bus, but I still had hope for the next one at 4PM. When I told my girlfriend about my decision to take Damri bus, her response was a suprise and a simple and clear “awas copet” (watch out for thieves). Given the bus condition, it seemed very prone to criminal activities, after all. Thank God all my valuables including my self were save. The official price for one trip is IDR 5,000 (SGD 1), and you’re entitled to a receipt as a proof of payment. As instructed by the lady, I told the driver to stop at the intercity bus terminal. I really looked like “a new guy in town”, so the driver joked me that the price to stop at the terminal is 50,000 (in a half-serious tone). I joked him back with a question “could you remove one zero for me?” with a smile. I didn’t want to assume anything about him, but finally I gave him only IDR 5,000, the official price (I didn’t get a receipt after all). Well Mr. Driver, if you read this post, I did it for your own good.

I was late for the 3PM bus, and the 4PM bus is full. The best option I could take was to put myself into the 4PM waiting list. It was very anxious, as my name was not called even as late as 5 minutes after 4. Luckily some passenger didn’t show up at the terminal, and the seat was given up to me. I arrived 3 hours later at the Jakarta terminal, and I rushed to take a cab to get to the church. As the distance to the church was not too far, the driver asked to pay a fixed price instead of using the distance meter. I accepted it, but really regret it later. It’s not that the price was too expensive, but somehow I indirectly helped the driver to corrupt his employer money.

The rest of the journey was not very eventful, though. It was more of spending quality time with my family, and resting my body after the adventurous trip to Bandung.