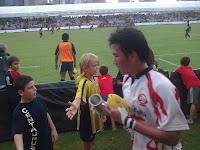 I was informed about the event few days before. It is in fact an annual event, inviting teams from many countries (mostly eastern side of the world) to play the Sevens-style of rugby. The game itself is very short. One game consists of 2 x 7 minutes (10 minutes for the final). Therefore the whole tournament was finished in two days (1-2 November 2008)

The entry fee was $20, but it’s worth it. Maybe because it’s the first time I watch live sport match. Or maybe because my brother took part in it. Yes, my brother is an athlete and he was one of the Indonesia’s “dream team” to play in this event. Though didn’t get the big prize, his team was the winner of Bowl tournament. By the way, the winner was SA Vipers from South Africa.
More pictures of the tournament, you can find at http://picasaweb.google.com/pascalalfadian/SCCRugbySeven
About Padang
Padang is a large grass field just in front of City Hall (the real one, not MRT). Though, it is close to City Hall MRT. Usually the field is left open with no barrier so people can play something. But for this event they created a “portable” stadium that encircles the rugby field.