It feels good to write again, after a long time of busy days in year 2013. I write this, to keep the spirit of writing, as well as to, well, keep at least one post per year on this blog. Boy, I really miss those days when I have time to write. May be sometime.

As the year before, the professional part of my life are shared between the startup I am building, and teaching at a local university. 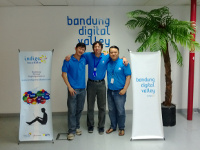 The startup, KIRI, started as a personal project that I worked on after office hours in Singapore. When I returned to Indonesia in 2012, Budi joined in, and we mostly worked at either a McDonald’s in Jakarta or my in-law’s house in Bandung. It was a weekend project, with lots of promises and some fanatic supporters.

In early 2013, I heard a surprising news that our project was selected as the finalist of Mandiri Young Technopreneur 2012. As a finalist, our team had to attend a week long bootcamp in Jakarta, and unfortunately it coincided with my wedding day. Luckily, Budi could attend most part of the event, while I attended few days of it. Other than the privilege to stay at a 5-star hotel, we also had the chance to participate in seminars led by important people like Bill Reichert from Garage Venture. Most importantly, we were able to build network with people. Though in the end we failed to be a winner, we had a lot of takeaways from this event.

We also participated in Blackberry Startup training, where we attended weekly sessions of startup trainings. Here also, we met with interesting speakers and people. We even managed to be the finalist of their business plan competition. As with Mandiri event, we again failed to nail the winning position here.

Mid 2013, we gave it another shot by submitting our proposal to Telkom’s Indigo Incubator event. After series of pitches, we managed to be shortlisted as a winner. For that, we received a grant of Rp 10M and seed funding of Rp 120M. Moreover, we also got a slot in their coworking space in Gegerkalong, plus networking and seminars with fellow startups and important people. In exchange: a share for them, and we had to follow their program, under the lean startup framework. We were happy with that, but not without some downsides. More features were implemented, and more business plans were developed, but it means that I have less time with my code to play with. You know, those little details and tweaks a hardcore programmer would like to code.

During this journey we were glad that Hudi temporarily joined our team as an intern, for a crowdfunded event organized by Wujudkan. He helped us to implement TransJakarta feature of KIRI, and paved a way for future expansion. Later of this year, Jovan also joined our team as a part time developer. He helped implementing the KIRI API, KIRI Widget, and other minor features.

Finally, though we are yet to receive our first revenue, I am very happy that KIRI grew a lot in terms of user base and usefulness. Not to mention that we participated in AngkotDay event led by our friend Saska, and featured in one of National Geographic Indonesia blog post.

For my teaching part at Unpar, it was not less interesting. We were short of teachers, and that means we had to teach more students that we should. At one side, it means that keeping up with the job was very challenging (e.g. skipping lunches with colleagues). On the other side, I became more creative in making things more efficient. Luckily I was helped with my background of working in Singapore, regarded as one of the most efficient countries in the world.

I also took the position of being a dosen wali (mentor) for new students as well as supervisor for final year projects. That means I got to know more of my students, not only in academic life but also their personal life. It is interesting to understand the challenges they have now, compared to myself as a student many years ago.

In many parts, my teaching job and KIRI actually synergize. For example, a final year student Nathan helped me developed a KIRI-based android app. On the other side, I have stories to tell to students about my experience building a startup and knowledge of many recent technologies that I can only learn in practice, rather than in university. 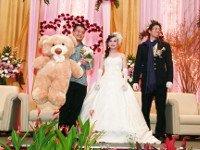 On the personal side, 2013 also gave me a radical change in my way of life. As mentioned earlier, I married my college friend Yunnie. Preparing the marriage was exciting yet challenging, as we prepared most of everything by ourself, and helped by some relatives. Just few days before wedding, Jakarta was struck by a heavy flood disaster. The government official issued emergency state, making the guests thought twice to come, especially those from other town. Luckily, two friends from Singapore, Abhineet and Christine managed to come and attended our wedding safely.

Being a married man has its own challenges and excitement. No matter how much I understood my spouse before, there were always new things I learned after marriage. If before, I took full responsibility of my own actions, after marriage, the responsibility is shared among two. The 24-hour-in-a-day slot is now also shared among us, meaning less “me-time” compared to before marriage. The consequences: less time for meeting friends, watching youtube videos, or, well, writing this blog. Having said all that, there are also benefits of it: a friend for life, a chance to learn new ways of thinking, and learning of new responsibilities. Anyway, we are happy that we are going to celebrate our 1st wedding anniversary soon It’s young, but as Confucius said, journey of thousand miles begins with a single step.

I didn’t really travel a lot this year, aside from Bali for late honeymoon and Malaysia for my brother’s rugby game. I do miss traveling to non-mainstream places like museums and parks, but those places are not for everyone.

Next year, we are planning to visit my brother in Brisbane for his baptism ceremony. This paragraph is just a little reminder for me to write a story about that.

The rapid progress of KIRI really took my time in 2013, and I don’t think it’s going to stop in 2014. More busy days ahead, but it should be exciting. I am not going to do this forever though, in a couple years from now (after KIRI can stand on its own), I am expecting to settle down and find more challenges in personal and family life. And travel. (Don’t you think it’s a coincidence that our website is http://kiri.travel?)