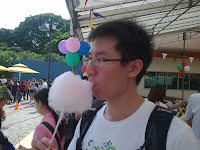 Summer is the time for fun! After the team building few weeks before, the Gemalto rec-club is now taking the turn to put back fun to function! The club organized a fun day for all Singapore employee in Escape Theme Park. Since the event was held inside the theme park, we had the option to participate in the games or merely trying out the attractions there.

However, the team games were too much for us after the last team building event. Therefore, I and my friends decided to ride on attractions instead.

The first attraction we tried was the haunted house. The LCD screen installed at the entrance –which shows the do’s and don’ts on the attraction– makes me a bit de-scared, though. And yes, when we went inside, there were no spooky smells or disgusting liquids. There were only robots, trying to surprise us with sudden movements. I was surprised yes, but not that scary. Amudi was laughing to the tricks already and trying to mock Rika, who was in front of him and behind me. The result, she grabbed my backpack very tightly for few times. Hmm, at least my backpack got haunted.

The next one was Pirate Ship, or more commonly known as “Kora-Kora” in Indonesian. We sat on a big ship-like platform, and swung back and forth in half-circle rotation. The most thrilling moment is when you’re at the maximum height, your body facing downwards; then it comes down at a very high speed, giving you tickling sensation in some parts of your body.

Next attraction was called Flipper, where you are spun horizontally only in a bowl-like platform. Well, sometimes you are rotated 45° vertically. It’s not that fun, though. The spin was only about 5 minutes. But we had to wait 15 minutes inside the bowl before it’s running because the operator wanted to check all safety belts are properly tightened one by one before he started the machine.

Just before lunch, we tried the roller coaster. The name of the attraction is family coaster, in which I should realized before. It’s a family ride. There were no 360° loops nor steep and that-quick descents. Or, should I say, it’s Singapore-style family ride, fully certified by the national heart foundation as safe for even the weakest person to suffer from heart attack by riding this coaster.

Then we went back to Gemalto booth to take our lunch.

After lunch, we tried the best attraction in this tiny theme park: the Go-Kart. We had to queue for about an hour before we could ride this attraction. But it was quite worth the wait to ride a mini-F1 with the Bajaj engine. My turn was next to Amudi and he recommended me to choose the car he just used, as it was most powerful compared to others. And yes, as I started pushing the gas, the car roared and ran pretty fast. For the three laps, I wasn’t even got passed by and secured the first place. The track was quite thrilling, where the first part of the track is a spiral-like shape to climb up to about 3 levels high. Just after the climb, there’s the steep descent. It has a lot of “slow” signs to warn drivers to stop pushing the gas. At first I ignored then sign. But after my car start descending, it was shaking very hard; only then I started to brake. And only after the descent, I started to push the gas again. Well, it’s quite a good 10-minute ride.

After the Go-Kart, we headed to Wet and Wild. It’s an attraction where you ride a small boat of two people, lifted to few stories high, then descend very fast into the water and get splashed all over the body. Most of us joined the queue, but when we realized it will be veeery wet, some people canceled, including me. So it left only Richson and Rika continuing the queue and ride on the attraction. Meanwhile, the others were just playing with Imam’s little baby.

The Go-Kart summed up our trip to Escape Theme Park. Some of us were to tired and decided to go home. I with some friends preferred to continue to Changi Beach since we are already in the east side of Singapore. The story is not included here, but you can see some pictures at http://picasaweb.google.com/pascalalfadian/GemaltoFunDayAndChangiBeach